Just over three weeks ago, I participated in my first race of the year. I thought it was high time I got my race recap done, especially before I run race number two in just a few short days.
The Oakley New York Mini 10K is one of my most favorite races to run. Not only is it one of the two women's only races put on by the New York Road Runner's Club, but it is also the only race where you get to run up Central Park West before continuing the race inside of Central Park.
On June 14, I participated in my fourth New York Mini race. The first time I ran it was when it was called the Circle of Friends New York Mini 10K back in 2006. In 2009 I ran it when it was called the NYRR New York Mini 10K. Then I ran it again when it was renamed the Oakley New York Mini 10K in 2013.
The day before race day, I headed uptown to the NYRR Club's office to pick up my race bib and tank top during lunch. This was my first time doing this during working hours, so I wasn't exactly sure how much time it would take me. Thankfully, by the time I got back to the office I still had 20 minutes to spare. Good to know for future bib pickups! 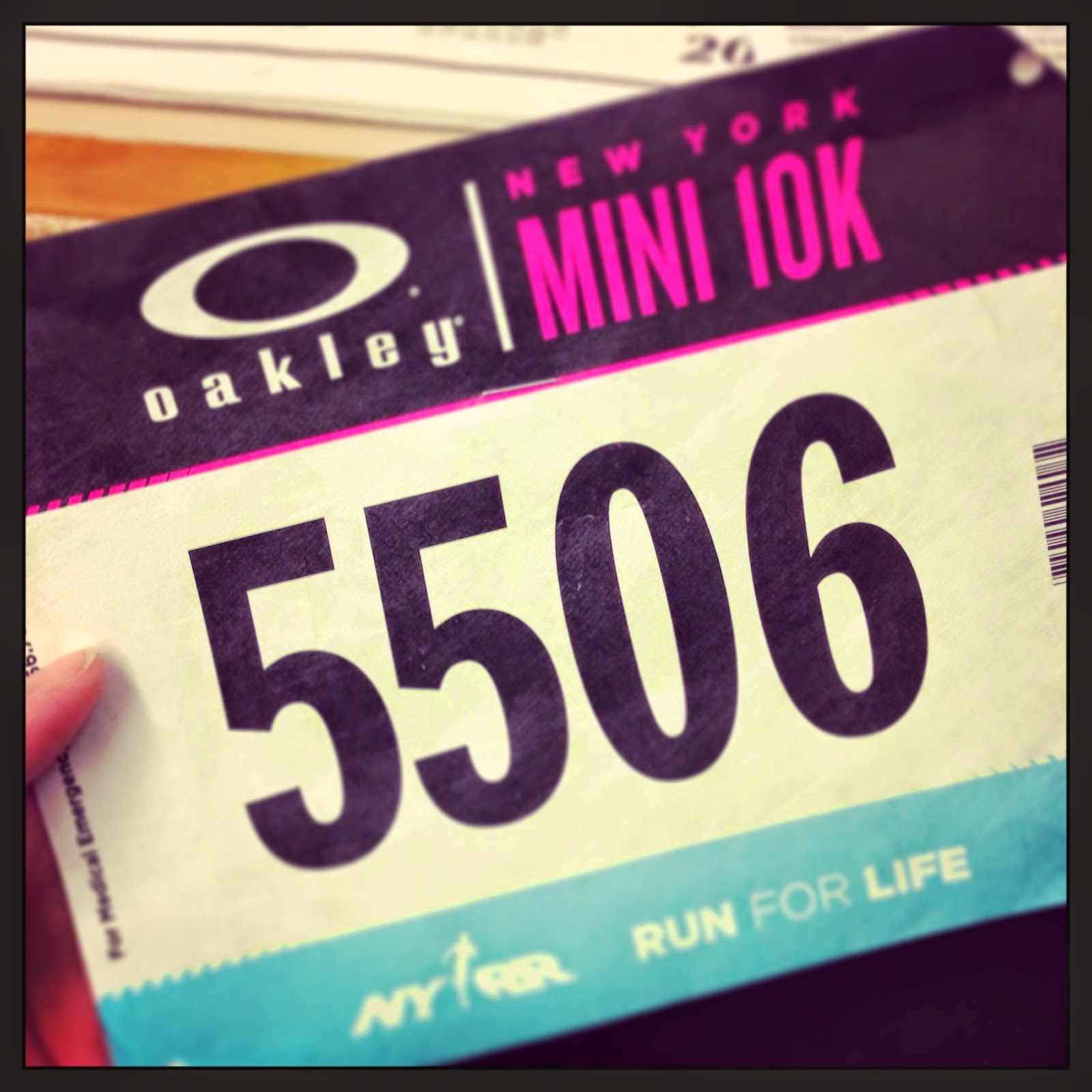 When I woke up at 6am race morning, I was grumpy as all get out. I was stressed that I had to take 3 different trains to get to the race start, due to subway work in Astoria. Those of you who know me, or have been to a race with me, knows just how much I hate being late.
Right before this picture was taken, 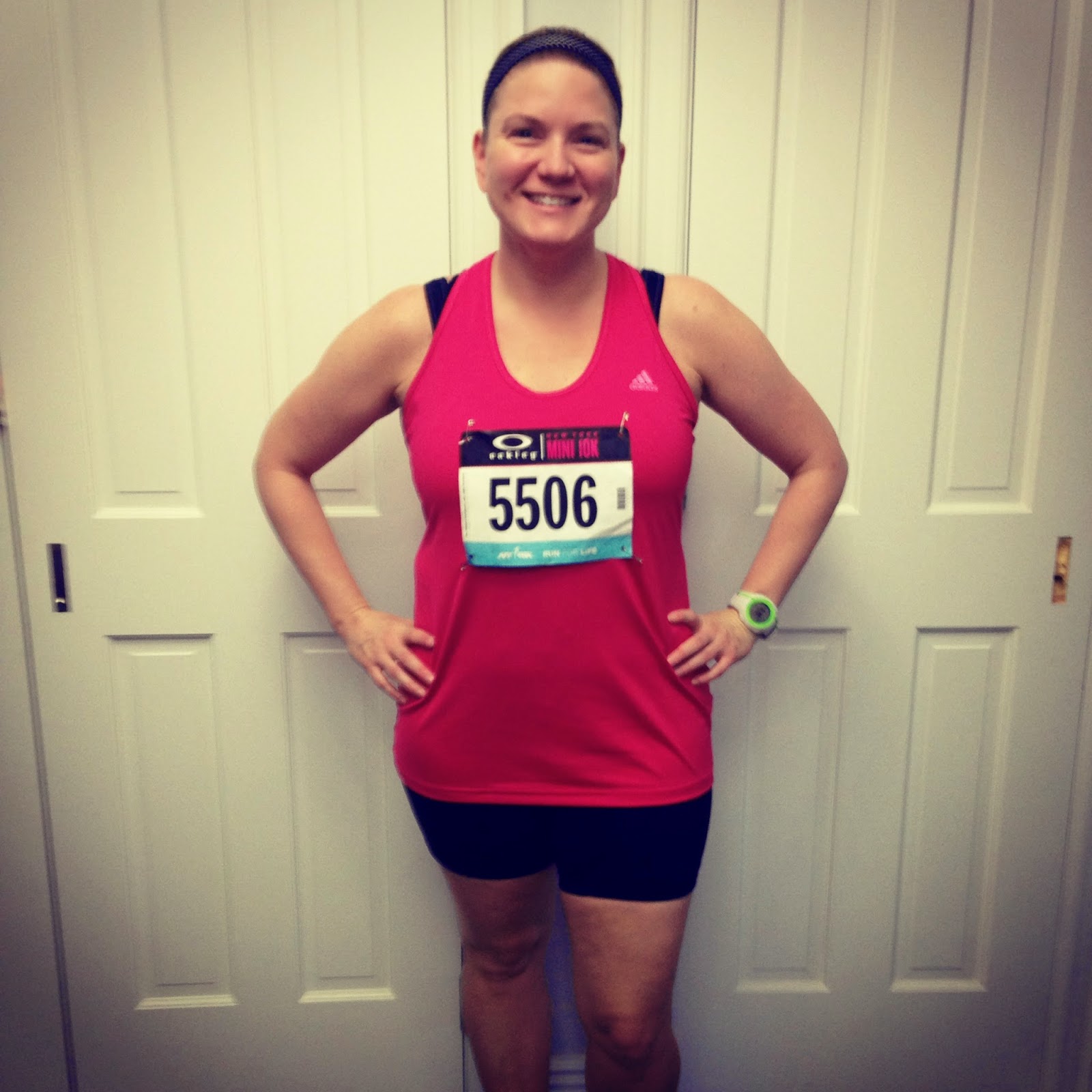 I had commented to my boyfriend that I didn't want to go. He laughed because seconds later I posed with a big smile on my face. Honestly, I did want to go. I love, love, love to participate in races. At the time I just wished it was going to be a little easier to get to the race and that I had someone going with me. This is where I need to make more running friends who like to race.

But alas, I got myself out the door. Three train rides later, which were surprisingly smooth, I arrived to the race start with 30 minutes to spare. Thank you Subway God's!

I hopped into my coral as soon as they opened and immediately snapped this picture. Taking advantage of them being empty to try and get a glimpse up Central Park West. 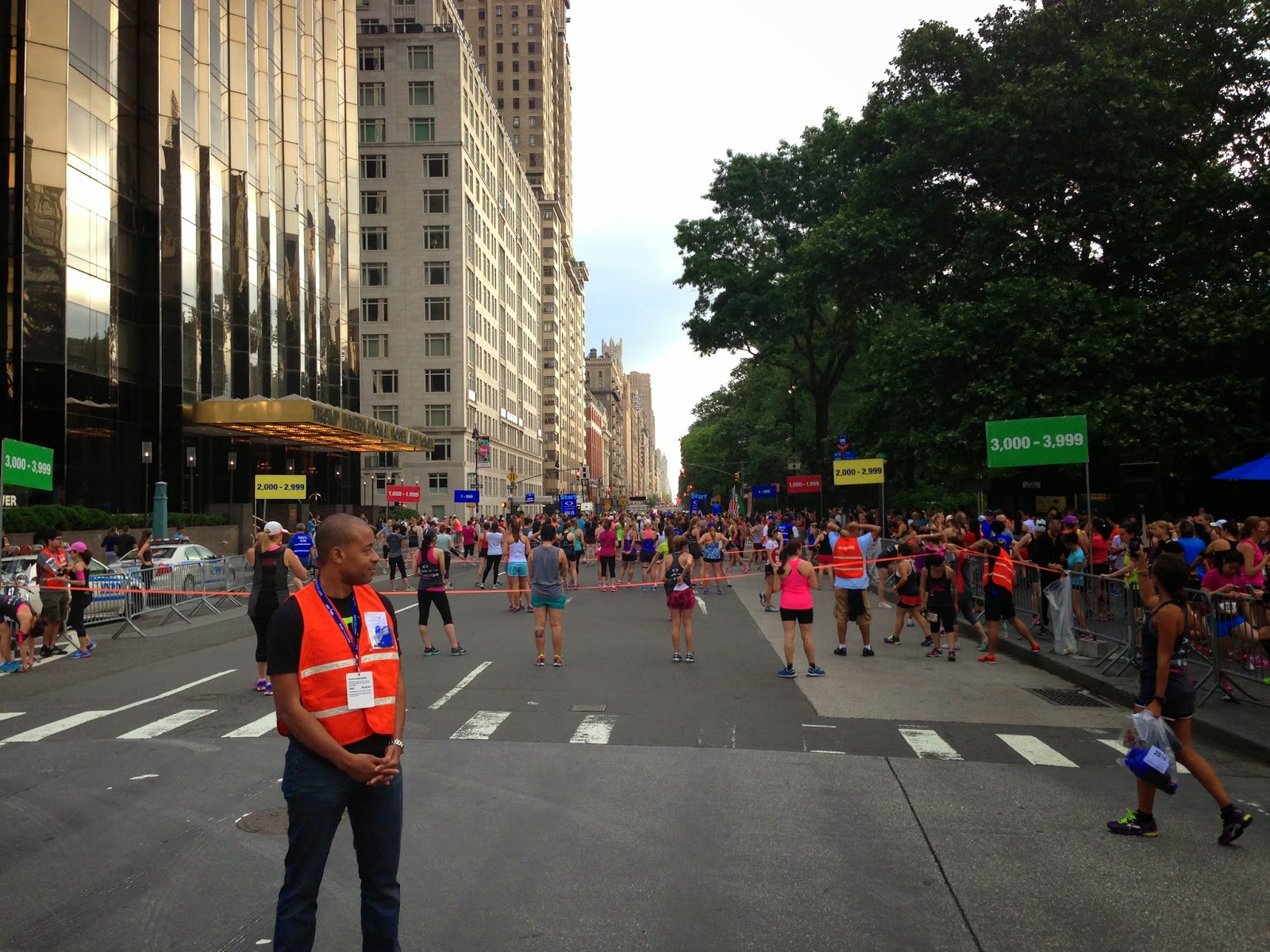 The race start was right outside of Trump's International Hotel and Tower... 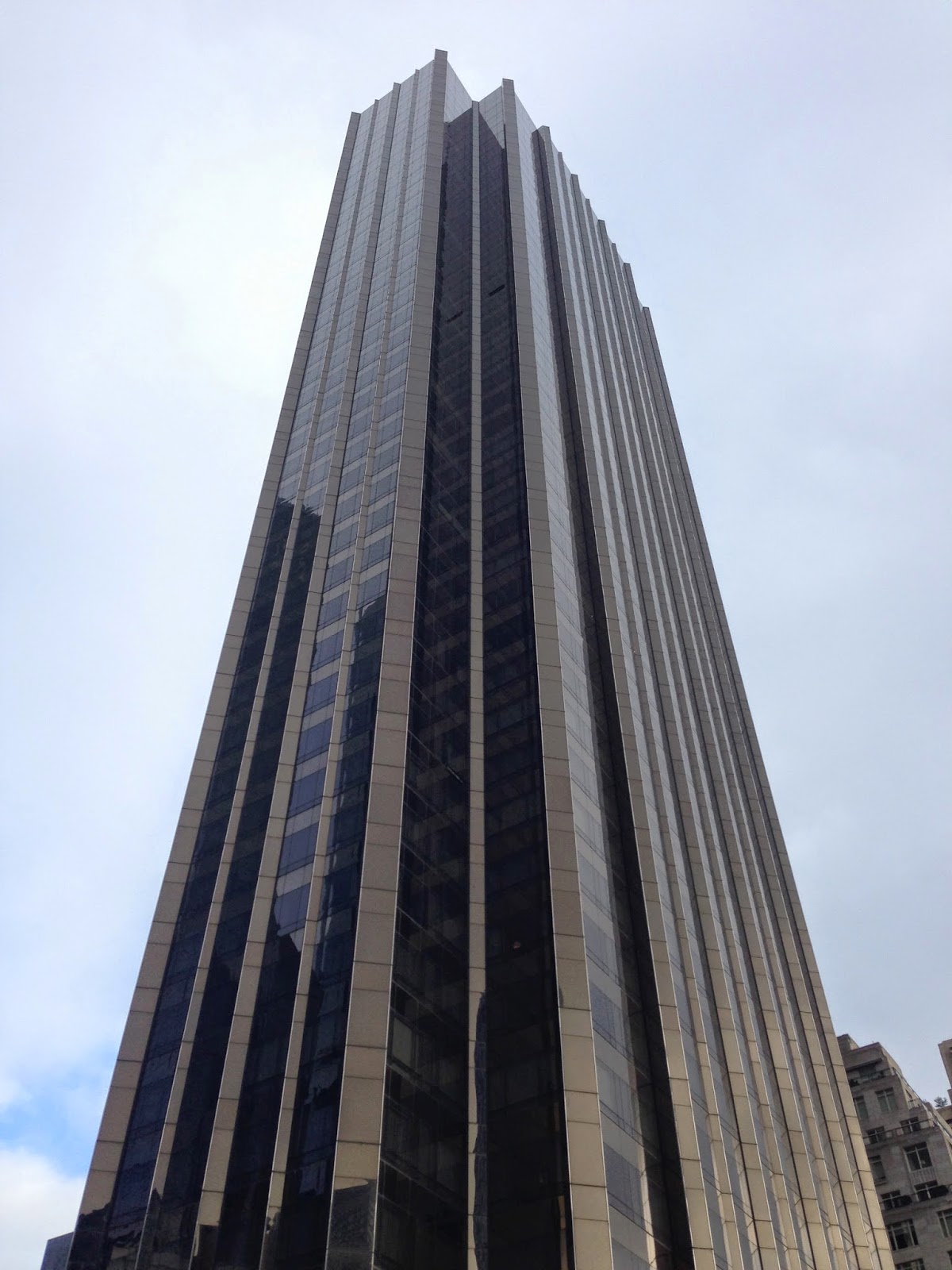 ...with the big globe in Columbus Circle... 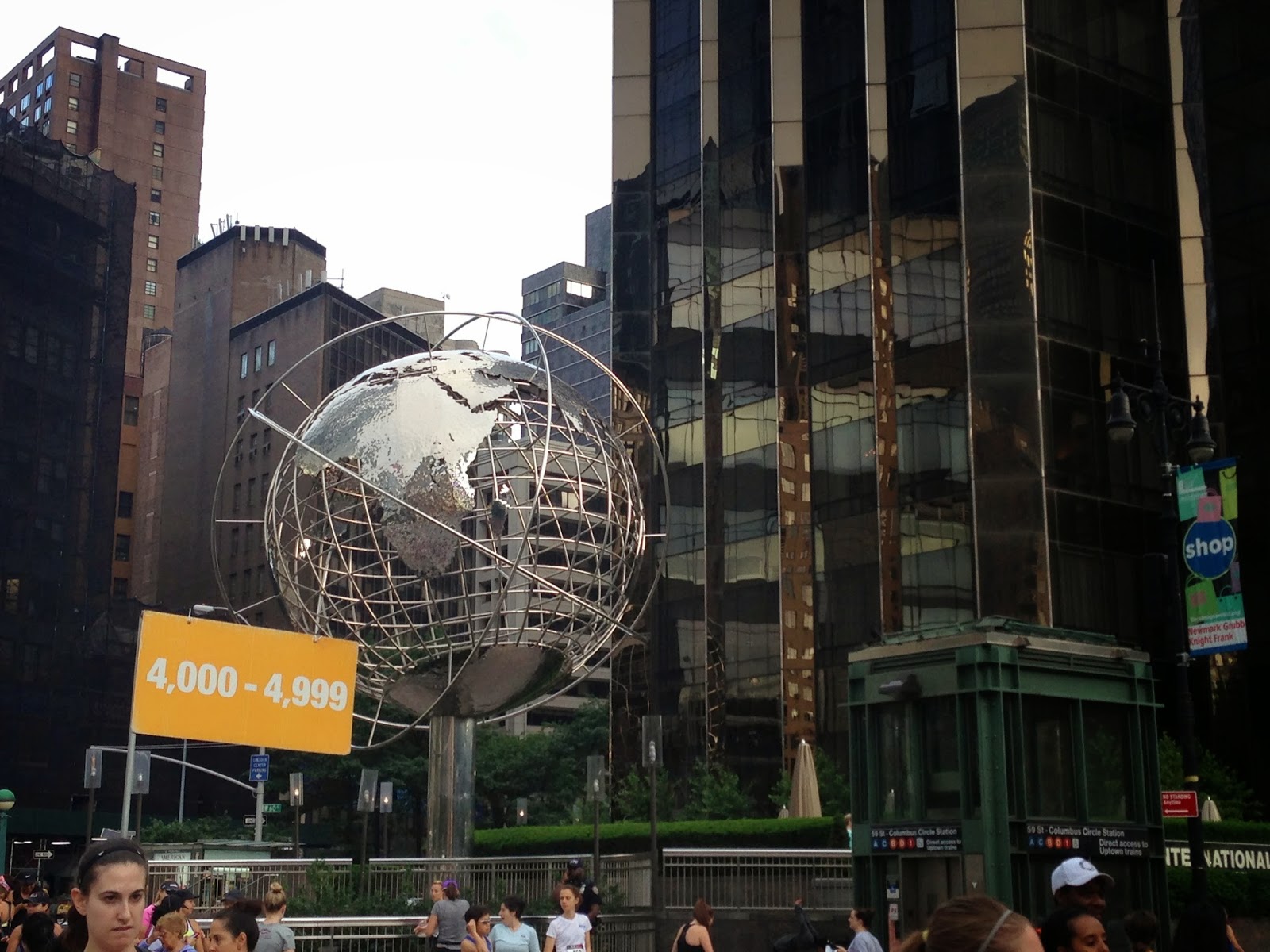 ...and of course no race start would be complete without the obligatory selfie... 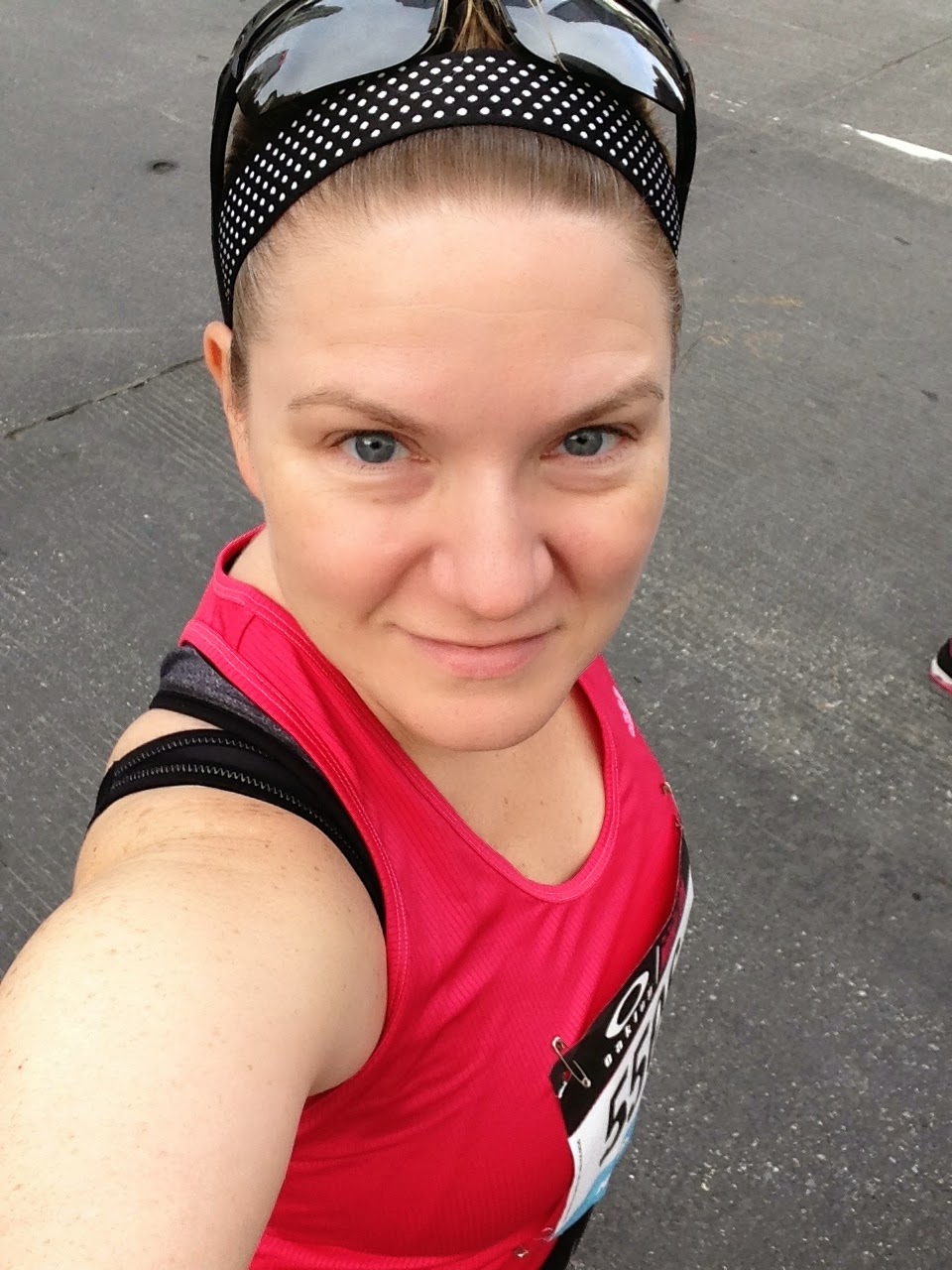 Then moments later, that empty sea ahead of me looked a little like this... 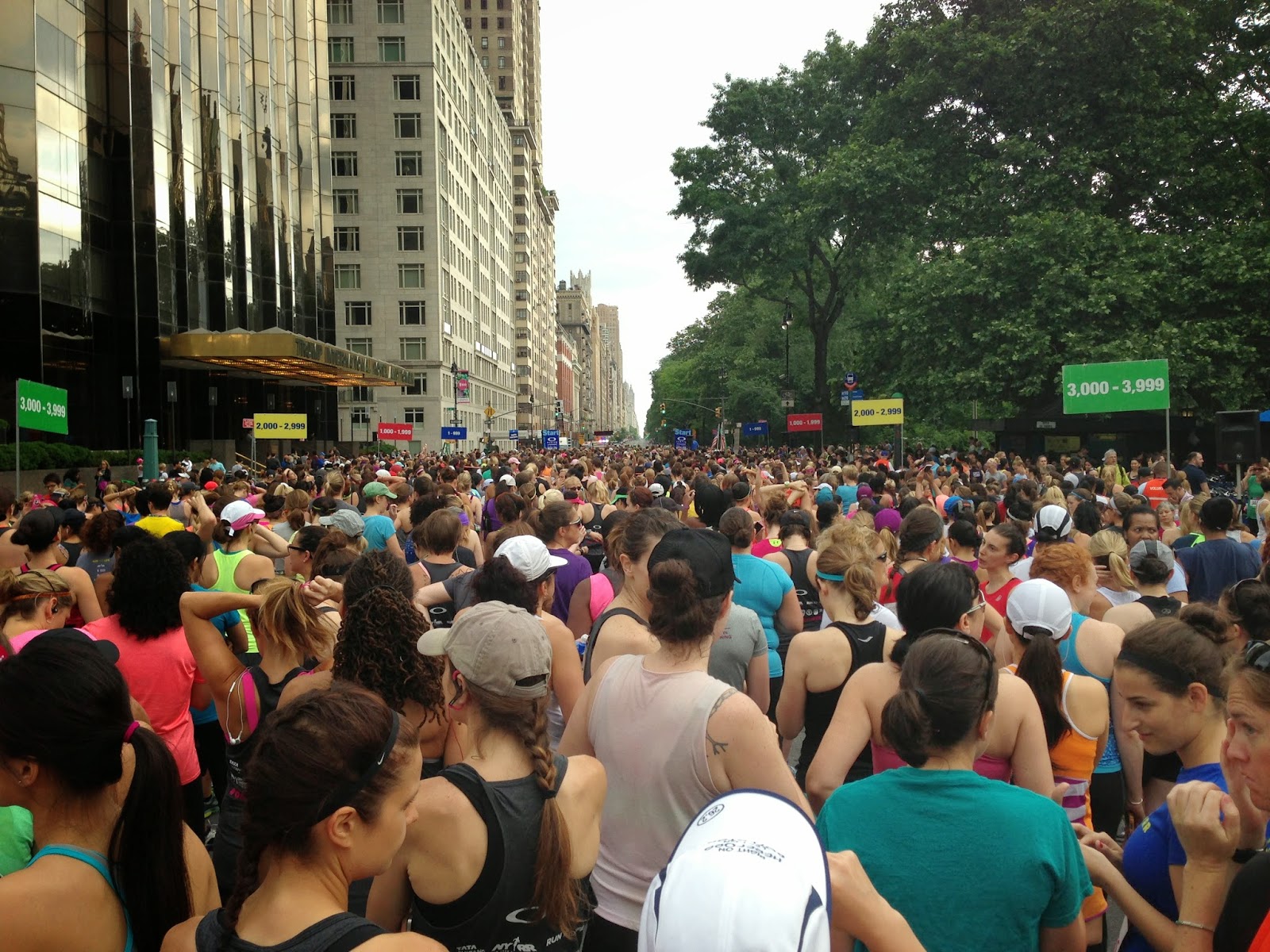 Yup, it was crowded. About 6,000 runners crowed. I even overhead someone say during the race that they had no idea that so many people would run this race. Um hello. It's a woman's only race that let's you run up Central Park West. Of course it's going to be crowded and I love that so many women come out and participate.

Heading into this race, I had a goal finish time that I only my boyfriend I was hoping to hit which would give me a PR. I wasn't confident that I would be able to run that fast. A speed that I hadn't done in a race in seven years. He told me before I left that I could do it, but I had to convince myself that I could and at the time I wasn't buying it. So I told myself I would be happy to finish in under an hour, but of course I kept in the back of my mind what my PR number would be.

So at the blow of the horn at 8am, we were off! The first mile takes you up Central Park West and it was nice to see that the cars had been cleared from the side of the road this year.

At 90th Street you make your turn into Central Park and head towards the Harlem Hills. I was thankful for all the hill training I get during my Sunday long runs on the trails. The hills felt like a piece of cake and when I hit the 5K mark I felt amazing!

The last 2 miles of this race are always the toughest for me. It's a combination of just finishing a major hill climb, the heat and knowing that the finish line is on an uphill. It's not a major hill, but it's tough enough of a one on tired legs that you are wanting them to sprint to the finish line.

As I crept closer and close to the finish line I kept peaking at my watch. I couldn't believe what I was seeing. I was on point for a PR as long as my legs didn't give out.

When I crossed the finish line my watch told me I finished in 57:03! I did it! I set a new freaking PR! 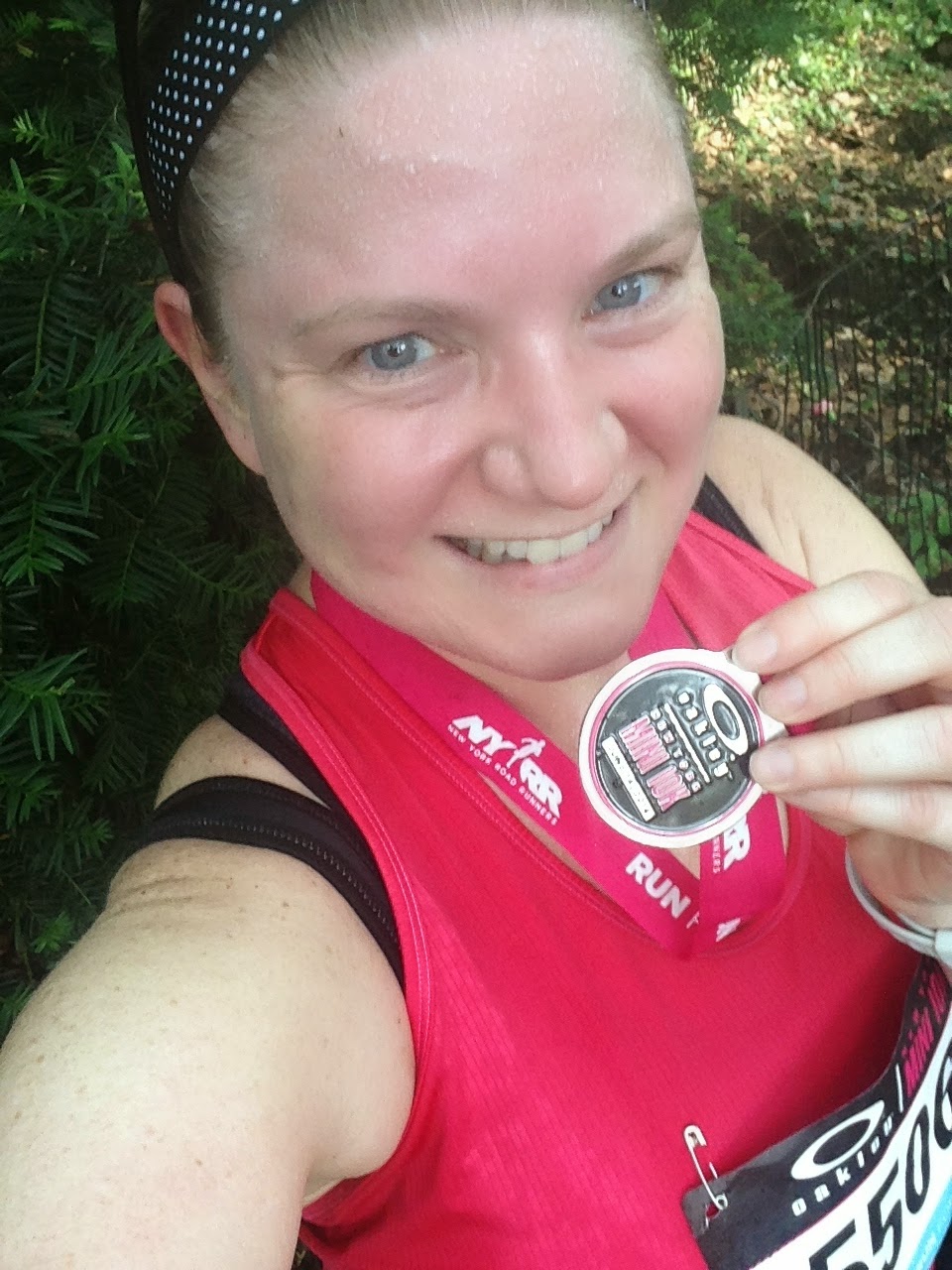 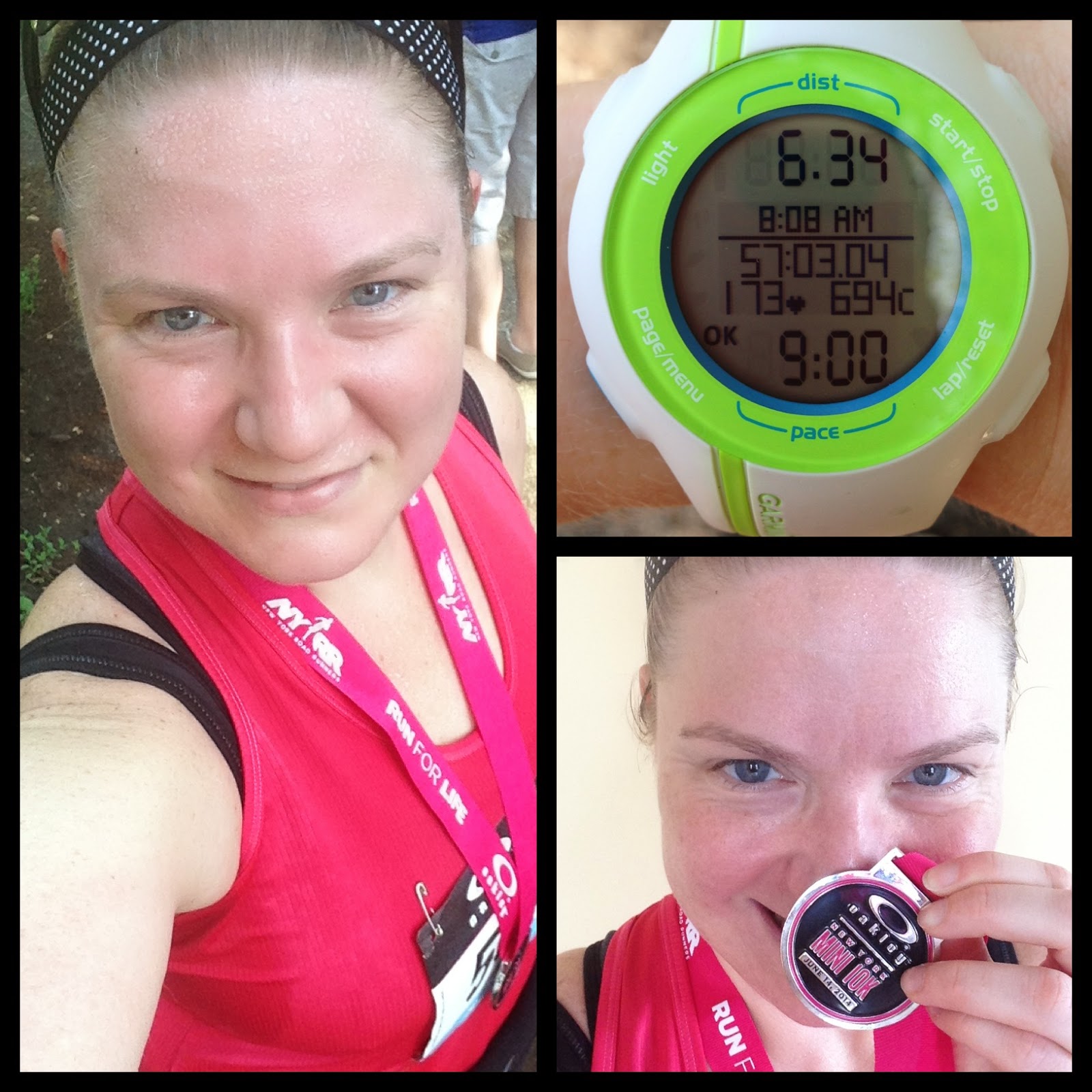 When I think about it, I still can't believe what an amazing race I had. I truly pushed myself and saw what I was totally capable of doing. I proved that I had what it took to get that PR my little ol' heart wanted so badly.

My boyfriend texted me after the race and said: "You are getting faster and wiser the older you become!". I never imagined my 42 year old self could beat my 35 year old self! Just shows that hard work, dedication and perseverance pays off. Lord knows I have put in the work and sweated buckets to get where I am today. 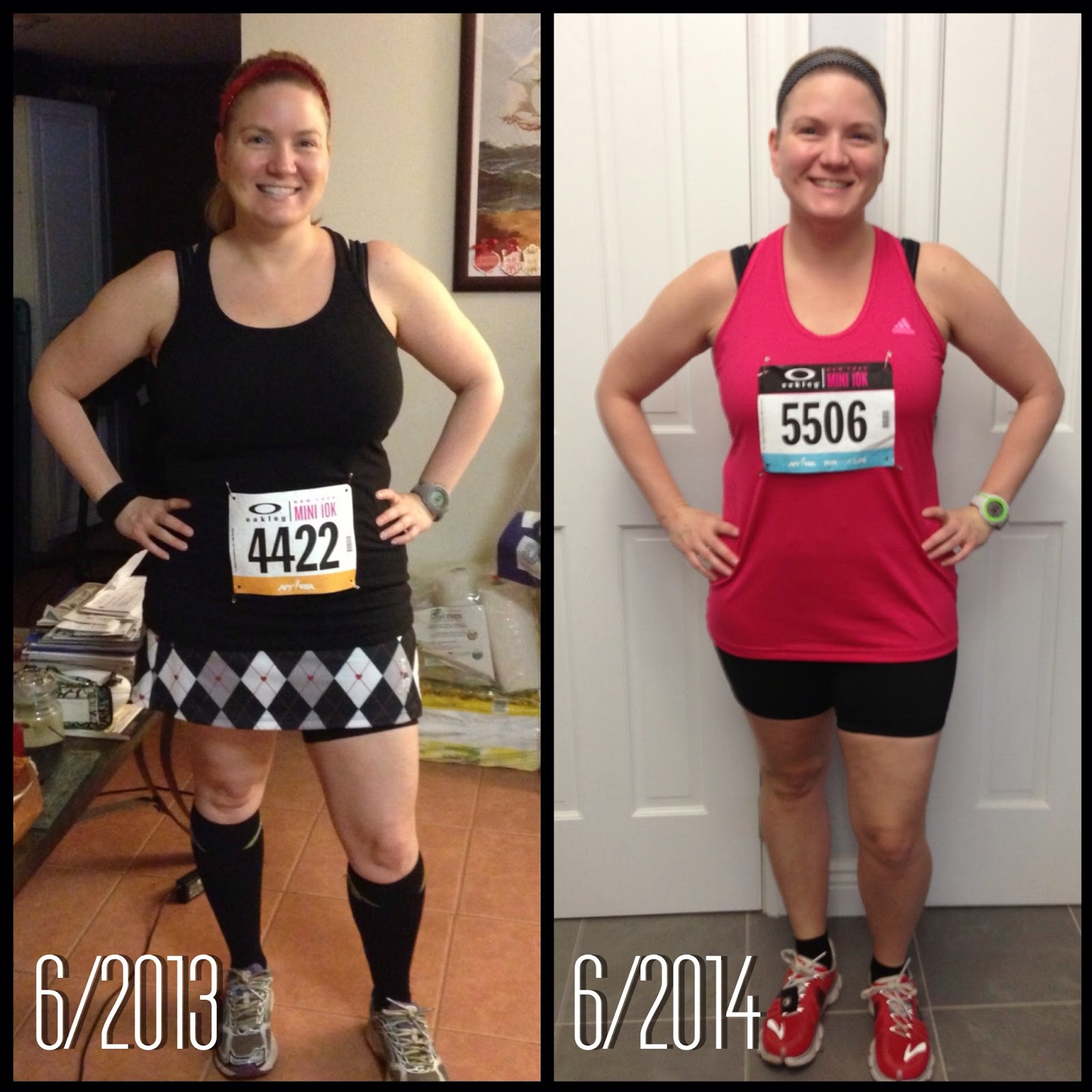 This is what a 30 pound weight loss looks like! Never give up my friends!
Posted by Deborah-- at 2:47 PM
Email ThisBlogThis!Share to TwitterShare to FacebookShare to Pinterest
Labels: Oakley NY Mini 10K Race, Racing, Run 1000 miles, running 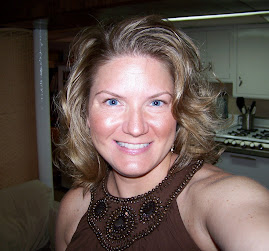 Deborah--
I'm a native North Carolinian transplanted in New York City since 1997. I have always had a passion for creativity and find various ways to express this in my life. My creative passions include scrapbooking, knitting and graphic design. To keep my mind and body healthy I am an avid runner/competitor and the newest activity in my life is practicing Bikram Yoga.